Whether you are a ‘yes’ or ‘no’ vote, resist the urge to use hurtful language against others

This past Monday night I was notified about this video clip from the January 11th Hoboken Board of Education meeting on social media.  The speaker makes several disparaging comments, including:

“We have an advocate…doesn’t have any children…didn’t…not married…didn’t do IVF, didn’t adopt, doesn’t foster, doesn’t coach a team…but we are going to listen to her on this nonsense? She can come to my house…I have four kids…I’ll leave her there for a week.  I will come and pick up the body later.”

This is presumed to be directed at me, but it could have been to others as well.  I know, speechless right?  I was too.

It’s not just the “you don’t have kids, therefore you can’t have a say on the proposed high school” rhetoric that in and of itself is ridiculous.  It is the reprehensible string of words he uses that objectifies a woman’s path in life and perceived choices of having children, or in this case, not having them.  This is wholly unacceptable and shouldn’t be tolerated.

I wasn’t sure if I was going to say something publicly or not other than my brief Twitter response which seemed to bring attention to it: 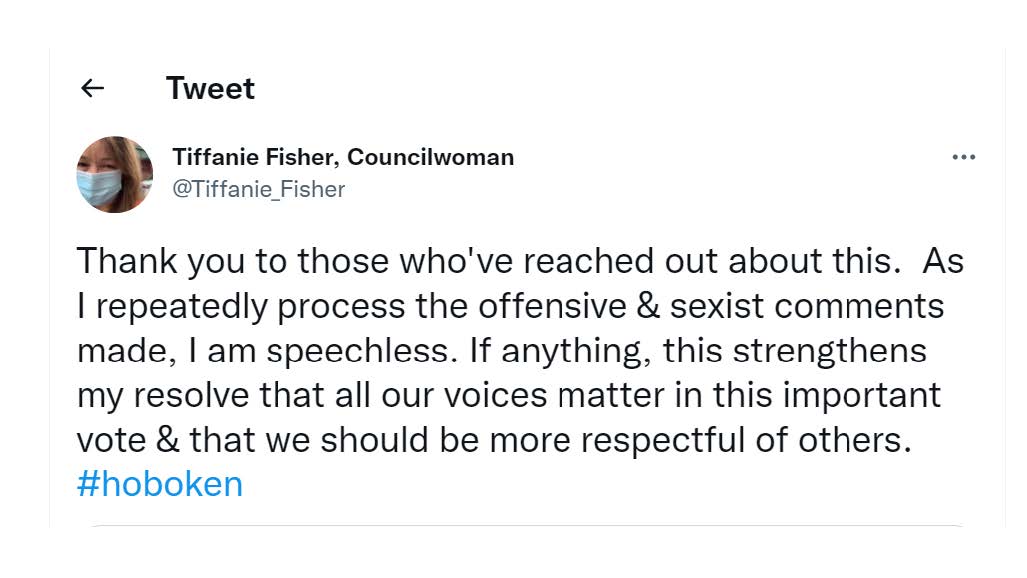 But his choice of words brought so many people to me in the past two days, men and women, friends and strangers, sharing their own frustration and disgust, their own personal stories, and their overall support for me.  I have a thick skin, but I can tell you that every single message I received moved me in a way I didn’t expect.  So thank you.  Your words told me that this matters to many and gave me the resolve I needed to share more broadly in the hopes we can bring this type of language to an end.  Quoting Martin Luther King Jr. in his spirit this week,

“Our lives begin to end the day we become silent about things that matter.”

What can you do?  Value, support and appreciate all the women in your life and the paths they take whether chosen, or not.  And tell and teach others to do as well.  #PayItForward

The one positive that has already come from this is an overwhelming feeling of the amazing sense of community that only Hoboken has.  It is what makes this place so special.  And we cannot forget that.  This BOE Referendum Vote has devolved to personal attacks and rhetoric that risks dividing this core fabric of our community.  And the worst of all, is the negative comments about Hoboken’s own youth.

What else can you do?  Resist the urge – whether you are a ‘yes’ or ‘no’ vote, resist the urge to use hurtful language against others because of their choice.  We live in a democracy where all votes matter and more votes matter.  #BeHoboken